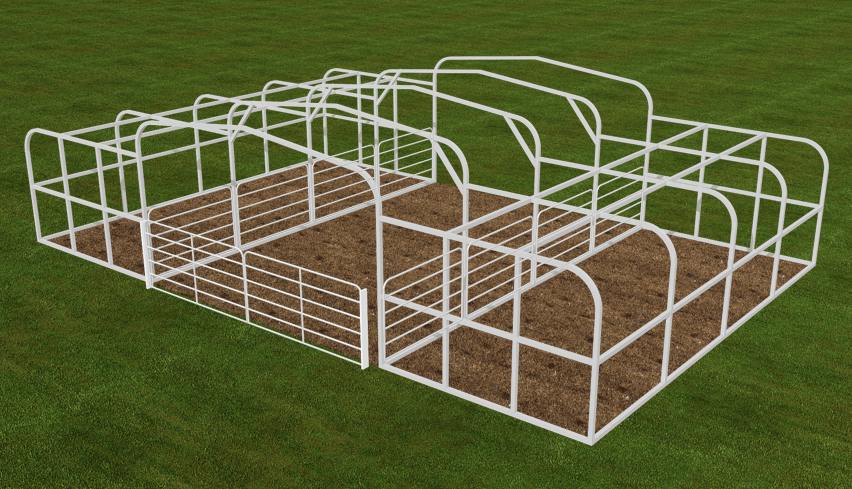 You have selected below colors

Everything you need to know about mold in your horse barn and how to get rid of it? 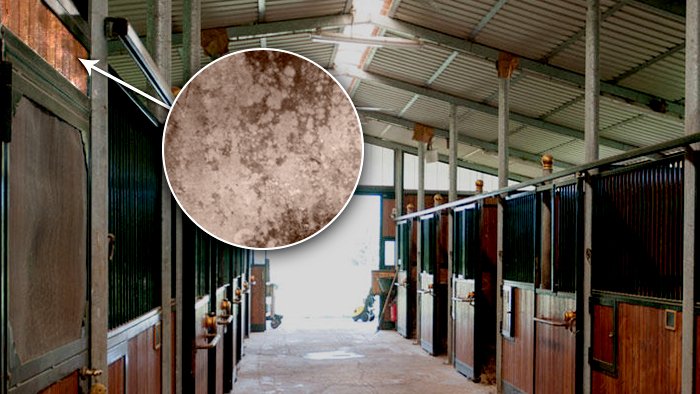 Particles of dust dancing in the sunlight coming through your barn windows might make for a pretty picture, but it can also be a sure-fire sign of poor air quality in the barn. More importantly, if you look close enough, you might find it’s dust coming from molded areas in the barn, and if this is the case, it’s an issue that needs to be fixed ASAP.

There are many causes of mold growth and poor air quality in your horse barn building, including inadequate ventilation, raised feeders, closed stall fronts, improper stall cleaning, and more. And when your horses are exposed to mold and poor air quality for an extended period, there are both short- and long-term health effects to be endured.

What Is Mold and How Does It Develop?

Mold and mildew are prone to areas with high amounts of moisture. Both are a form of fungus, with the mold being microscopic airborne spores and mildew merely being the visible form of growth that mold takes on. Even though the two are different in some ways, both are dangerous to the health of your horses, and it is important to keep them out of horse shelters.

Damp barn walls are particularly vulnerable to mold. And because of the way mold spreads, by extending its hyphae, it can crawl outward and overgrow, especially when the conditions are favorable. So even if you see a small area of mold, it’s important to take care of it soon before it grows into a much larger area. It’s not uncommon to see mold growing on damp hay bales, in the feeders themselves, and any other areas where the horses fed.

How Does Mold Impact a Horses Health?

Back in the 1930s, horses in Eastern Europe and Russia began dying and, at first, the reason was unknown. After a bit of investigating, though, it realized the horses were dying due to issues related to black mold. Because of being exposed to the black mold, the horses were developing immune matters that led to bleeding and infection. From here, the horses developed nervous system disorders and eventually died.

Gastrointestinal issues are some of the most common signs seen by horses eating moldy hay. It’s also not uncommon for them to develop respiratory problems. Without a kind of laboratory equipment, it is practically impossible to determine how much mold is in the hay the horses are eating, so while you may think it’s a small amount, it could thoroughly saturate in mold and mildew.

Some horses that encounter mold on a regular basis form only minimal symptoms, such as a mild allergic reaction. For others, though, it can lead to an organ failure. If you have the smallest suspicion, there is mold growing in the horse barn. You need to have it removed immediately, especially in the areas where the horses feed. And mold is not something that will take care of itself. Once it’s there, it won’t leave until you get rid of it.

Tips for Getting Rid of Mold in Horse Barns

Once you notice mold or mildew in your horse barns, you might think it’s going to be a complete hassle and headache to get rid of it. But in all actuality, there are simple tips you can follow to eliminate it and prevent it from coming back. First and foremost, you need to keep a close eye on the condition of the barn, including the feeding areas and the feed itself. If you notice mold, remove the horses until the mold removed.

As far as the horse tack, you’ll want to store it in an area where there is no moisture. If it gets damp, especially the leather pieces, there’s a good chance mold will start forming on it. If you were to be out riding and it was to rain, you’ll want to wipe down the tack when you get back to the barn and make sure you don’t put it away wet or damp.

It’s also important to remember that mold likes growing in a stagnant environment and the simplest way to keep the barn from forming this type of environment is to keep the air circulating. You can achieve this by opening windows and even put a fan or two in the barn to circulate the air. In addition to fans, you’ll also want to add fluorescent lighting to the barn. When moving atmosphere combined with this type of light, it helps prevent the growth of mold and mildew.

Lastly, no matter how hard you try, there is still going to be some moisture in the air that gets into the barn. Because of this, you need to clean the stalls as often as possible, preferably once or twice a day. The cleaner they are, the less likely mold is to grow. When cleaning the stalls, avoid using toxic cleaning products. The best product to use is a traditional Clorox cleaning solution.